WHAT TEMPERATURE MEASUREMENTS ON LARGE CITIES IS TELLING US

For this second analysis, we will take a close look at Toulouse (Occitanie, FRANCE) and Atlanta (Georgia, USA), two twin cities.
We will try to answer the following questions :

Where are the main heat islands ? freshness ? What are the neighborhoods where it is good to live ? How to compare the two cities ? Do they have the same form of urbanization? Which appears to be the most resilient to climate change ?

As we discussed in our previous article, Pixstart measures the temperature in the city every 10 meters (more precisely the surface temperature at the level of the urban canopy). To achieve this, we combine thermal infrared from the US Landsat satellite with precise ground emissivity mapping derived from measurements from the European Sentinel-2 satellite.

The following image, which shows the temperatures above Toulouse, shows the contribution of the combination of the two satellites compared to the classic use of Landsat (left image). 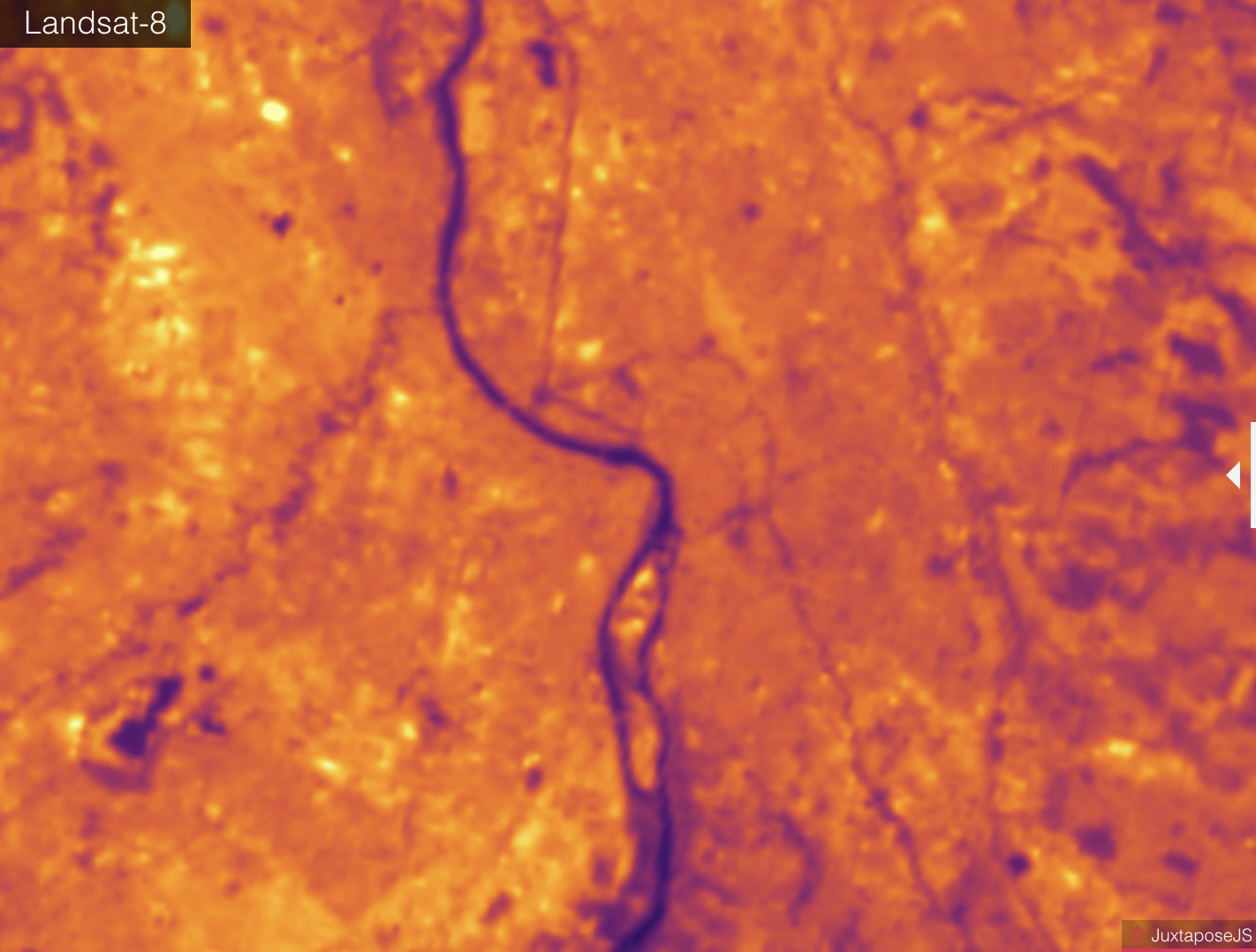 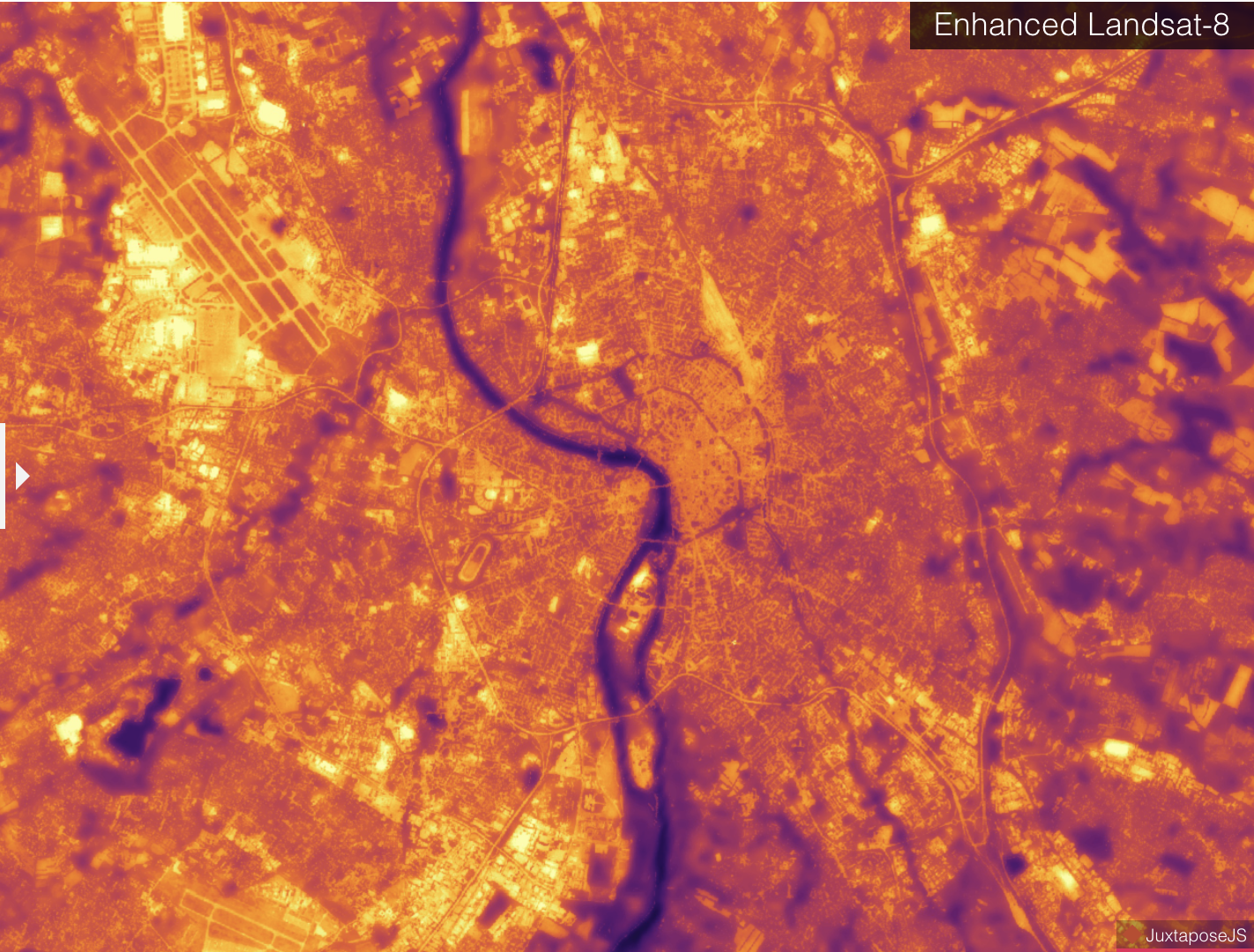 This article does not aim to observe changes in city temperatures over time, which are essentially due to climatic changes, but to reveal the structural organization of each city, an image of urban planning decisions which have , been made over time.

It does not seem obvious, at first glance, to relate a temperature distribution to an urban organization, but this is what emerges from our observations because urban constructions have an impact on the air temperature. In addition, given that temperature is one of the major, and therefore inexorable, physical parameters of the living environment of humans and other living beings, temperature images are also a way of observing the social organization of cities.

We performed an analysis for each city on a hot date (Toulouse and Atlanta being in the same hemisphere, these dates take place during the summer) : 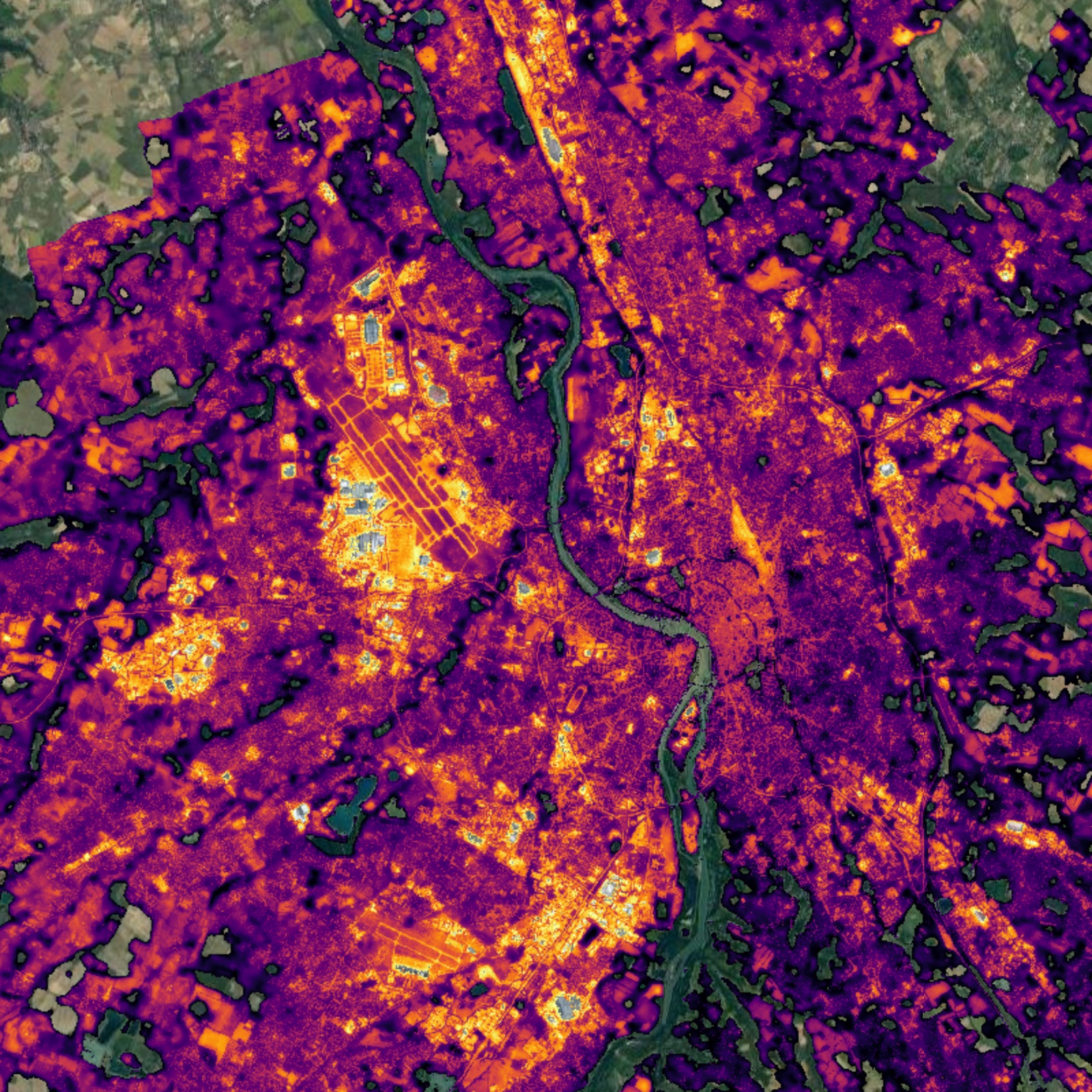 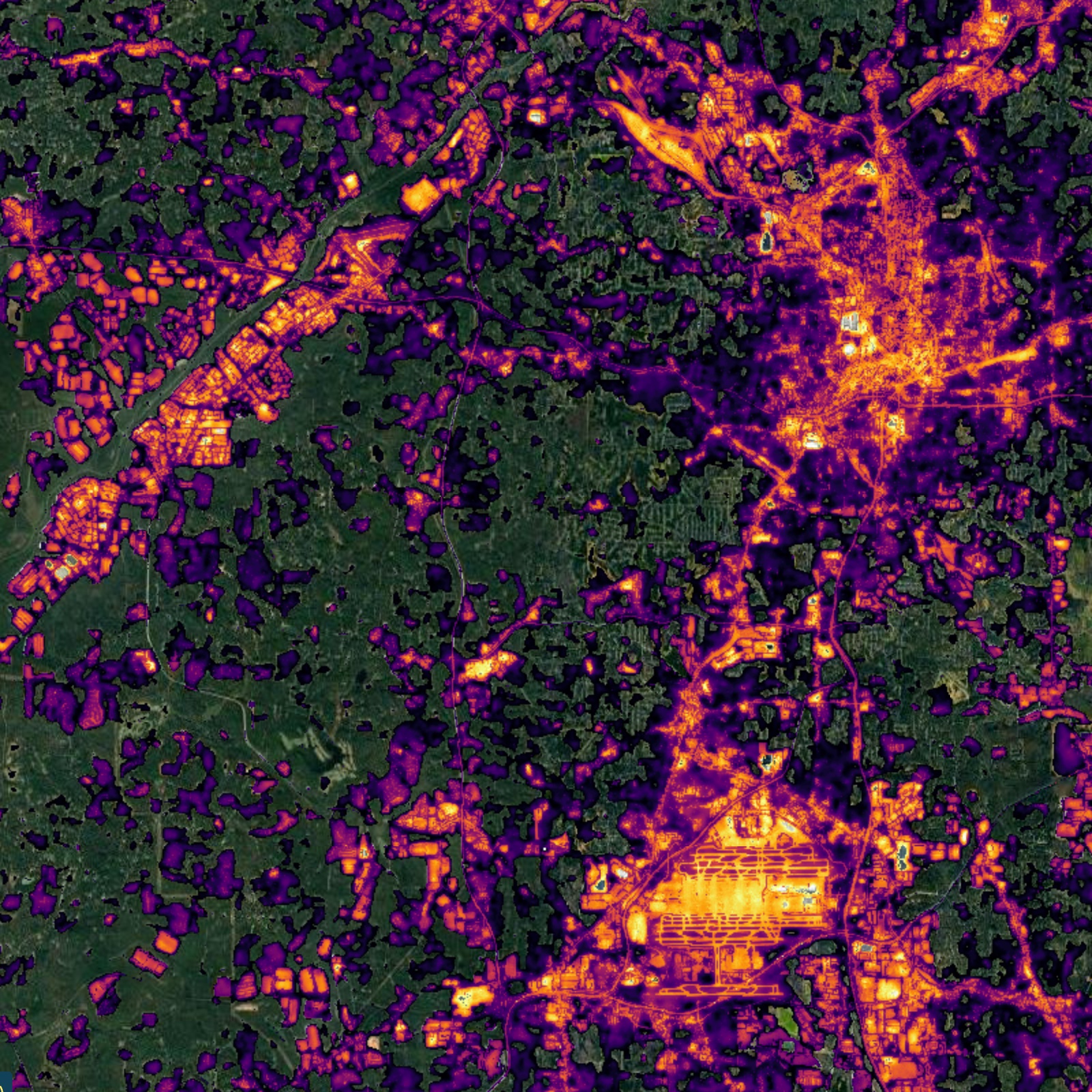 Atlanta is therefore a priori more likely than Toulouse to be resilient to climate change throughout its territory if it manages to maintain its tree cover. For Atlanta, it is a question of reducing its scale factor in order to reduce transport and therefore energy consumption, that is to say to guarantee populations that they can work, eat and be entertained within suburban closest to their home. Atlanta is able to continue its urban expansion in the same way, while maintaining a pleasant living environment in almost all places. This is a biomimetic expansion with a reticular-like organization.

Toulouse, on the other hand, has a long way to go towards climate resilience throughout its territory. Its expansion policy does not plan to reduce its east-west territorial divide, the main source of road transport and social enclaves in its territory, but rather to improve its living environment starting from its center (see for example  creation of ZFE, urban renewal, land de-artificialisation).

Toulouse Métropole envisages its demographic growth through an almost random urban densification in peri-urban areas (where there is still space) by a very strong artificialization of soils (see for example Paleficat) while permanently providing for the construction of new circular roads. to be able to go to work and consume elsewhere (see for example the BUCM project). For the moment, therefore, in view of the projects envisaged, it is a paradigm of concentric urban expansion, classic in France since the 1970s. Rather than a nuclear vision of the city concentrated on the metropolis, it would be necessary to innovate with a reticular vision and not be afraid of a fractal spread bringing together complete poles (leisure, housing, work), the only solution for thermal and environmental resilience at the local scale, ie a pleasant living environment for all.

Further studies would be necessary to list the possible actions for each city to improve its resilience. For future publications, we suggest continuing our blog by studying other cities on other continents.

At the end of July 2020, it is very hot in Toulouse, a maximum of 38 ° C in the shade. The following map shows an overview of the greater Toulouse metropolitan area in surface temperature.

The following maps of the city center of Toulouse, allow you to better understand the distribution of the urban structure of Toulouse :

In detail, in Toulouse, there are five major thermal profiles :

THE MAIN ISLANDS OF FRESHNESS

Preliminary remark: agricultural areas are not included in this analysis.

This image highlights the urban organization around the Garonne with, to the south-east, the residential house districts integrating the Côte-pavée, the Busca, Rangueil and Ramonville-Saint-Agne.

To the west we notice a darker rectangular shape corresponding to the historic district of Saint-Simon wedged between the Francazal airport (to the west), the Thibault industrial zone (to the south) and the boulevard Eisenhower (to the is)

It is also likely that the new constructions underway will gradually eat away at this island of freshness.

THE WARMEST CORNERS OF TOULOUSE

If we now shift our temperature setting a few degrees upwards, the following image shows all the commercial and industrial areas of the city, including a few sports complexes.

There are then 5 major urban heat zones:

This image shows the importance of Airbus and the aeronautics hub around which Toulouse’s economic activity has developed.

We also note that the agglomeration is very compact and disparate, that it was created around a very dense city center which has widened, on the same bank of the Garonne, by very cool and pleasant residential areas. It is the more vegetated left bank, where life is good.

Industrial and commercial centers were then created in areas outside the city center on the other side of the Garonne. These zones, installed according to the available land, have generated a strong urbanization. It is the much less vegetated right bank of Toulouse where we find the main working-class districts.

This differentiation of activity between the right bank and the left bank is confirmed by the traffic congestion existing in the city of Toulouse towards the aeronautical center and on the ring road bridge passing over L’île de Ramier.

The metropolis of Atlanta is very contrasted, between very hot urban and industrial centers and very cool residential areas because they are very wooded, there are no intermediate areas like in Toulouse. Although totally urbanized, the Atlanta area is characterized by a clear separation between the residential and the rest of the city.

The following image has the same dynamics as that presented for Toulouse (i.e. 10 ° C) and it should be borne in mind that this area is totally urbanized. We recommend that you take a zoomed-in version at the green part in the center of the left image and you will very clearly see the houses which, thanks to the vegetation, have a low impact on temperatures (right image).

THE WARMEST CORNERS OF ATLANTA

Metro Atlanta’s urban heat islands are quite massive but widely dispersed, leaving plenty of room for a well-ventilated residential fabric.

It should be understood that all the dark spaces are in reality residential spaces spread over the entire map and show a development of homes guaranteeing a high level of freshness.

Gwinett Place, a huge mall in northeast Atlanta, is arguably the hottest place in the city.
This is not surprising given that more than 60% of it is made up of parking lots. 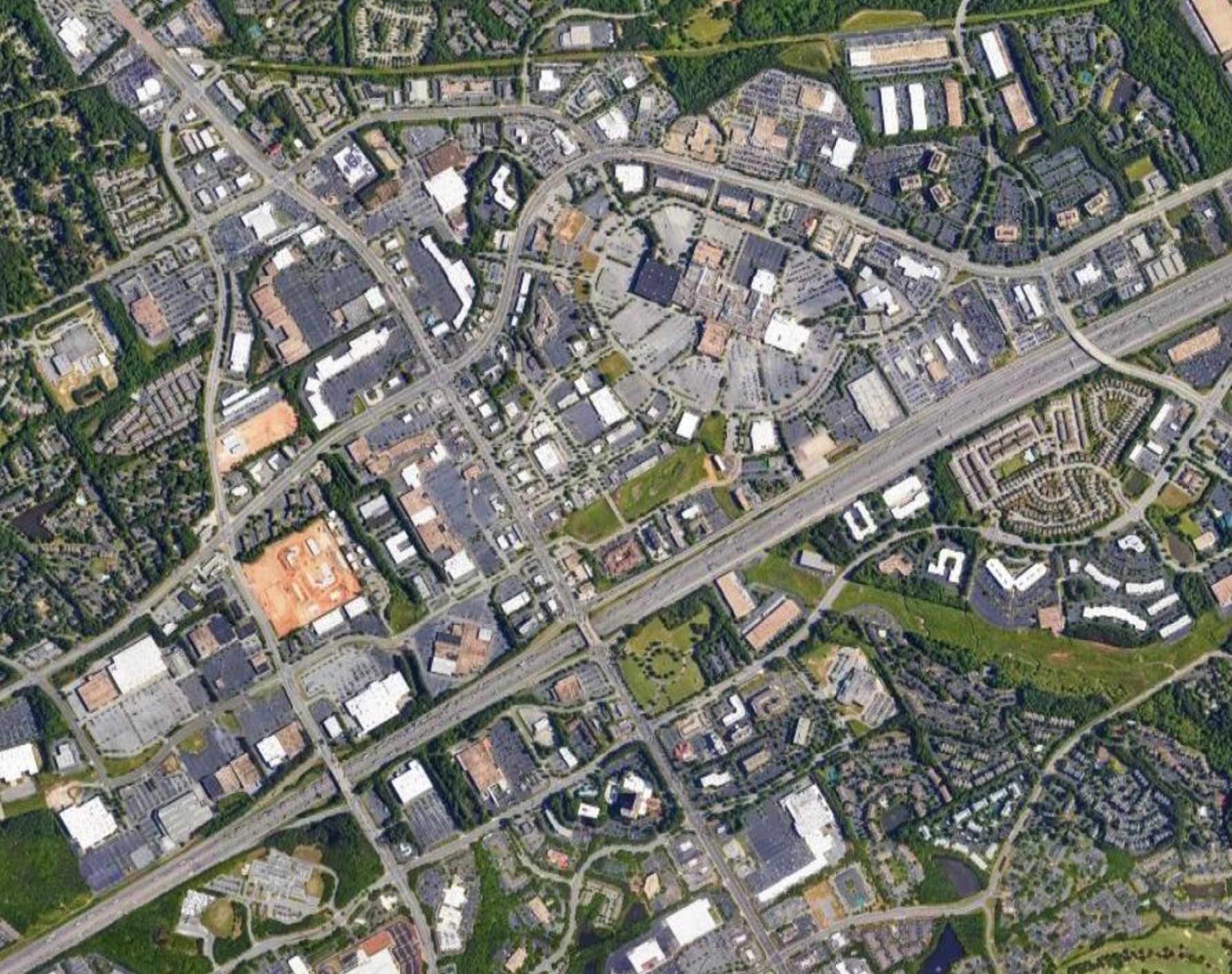 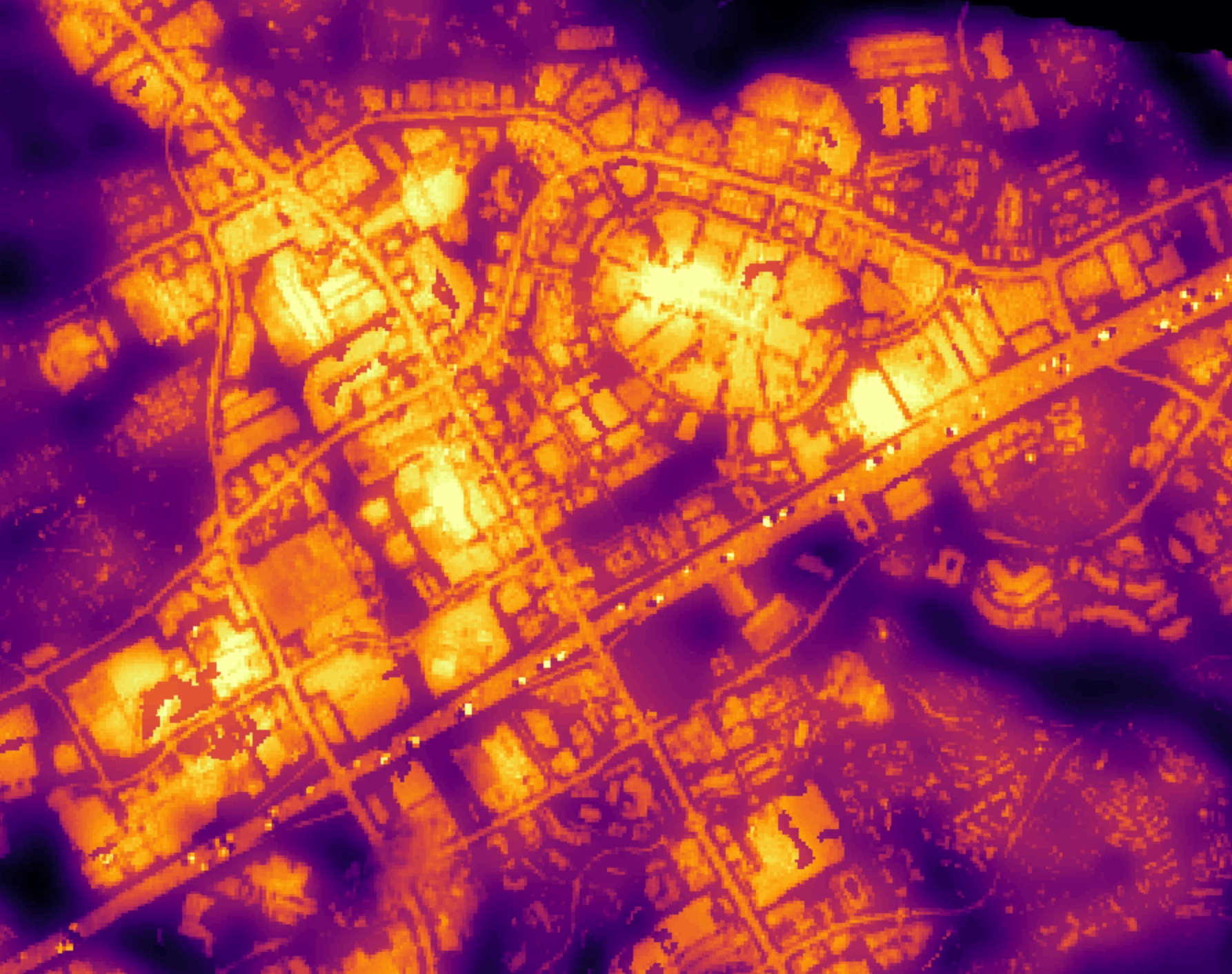 Classically enough, the International Airport (to the south) and Downtown (to the center) are also some of the hottest spots, but again not surprising.

The business districts then extend on the road to Gainesville in northeast Atlanta.

From South-West to North-East:

Atlanta grew up in the middle of the forest, but without completely destroying it. It has mastered the development of industrial and commercial zones by concentrating them on major arteries giving an organic aspect to urbanization. Metro lines and intra-urban highways follow these major arteries. One can imagine, however, a certain drawback which is the dependence on the automobile dear to Americans and very significant traffic congestion at rush hour on these major arteries.

Through this short analysis of the urban structure of these two twinned cities, we observe two very distinct modes of evolution.

The first, Toulouse, is a very classic example of European cities with a very condensed urban center, residential areas planted with greenery of gardens that are not very extensive and available to the wealthiest populations. Indeed, the superposition of the freshness points with the INSEE data of the highest average incomes is very telling. Industrial and commercial areas, on the other hand, are highly concentrated outside the city center.

On the contrary, the city of Atlanta has developed around arteries with a spread of populations and therefore residential areas throughout the territory, this is what has been called the development of suburban downtowns which are new urban nodes.

Highly vegetated residential areas are spread around these urban nodes. Seen from space, it is clear that the city of Atlanta seems to have a biomimetic urbanization with a reticular type organization while the city of Toulouse has a massive and asymmetrical development, with a poor distribution of pleasant places to live.

Further studies would be necessary to list the possible actions for each city to improve its resilience. Atlanta seems despite everything to be marking time in its structure, it remains to guarantee that the populations can work, eat and be entertained in the suburbs closest to their homes, thus limiting the use of the car and the inter- knots at the bare minimum.